Family holidays and get-togethers are often a catalyst for divorcing parents to bring unnecessary personal distress upon themselves, each other, and, ultimately, their children.  Fortunately, the counter-defense to such a consequence is rather simple: the priority of healthy choices in self-care. 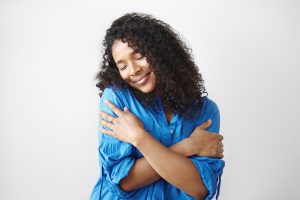 A Story From My Files About the Need for Self-Care

Some years ago, I was representing a woman (let’s call her Mrs. X) who was divorcing her husband. After 30 years together, she had had enough of his relentless affairs and drunken verbal abuse. Ironically, any person looking from the outside would have considered this woman’s world an ideal one in which to inhabit: A multi-million dollar home in the exclusive golf course community of St. Albans, which was usually filled with the laughter and antics of extravagant business parties hosted for her husband’s monied clients.

The holidays, especially, were an occasion for Mrs. X to unleash her imagination (and her husband’s expense account!) in order to entertain on an ever-grander scale.

This particular year’s holidays, however, were going to be quite different from any other Mrs. X had planned in the previous 30. This year, she was going to be alone, in a modest apartment, without her grown children by her side.

Mrs. X’s husband, on the other hand, still maintained a residence in the lush environment of St. Albans in his expansive mansion and landscaped grounds. And he was determined to reenact all the previous Thanksgiving’s highly anticipated festivities: an open house for family and friends, a day filled with sports activities (golf games/touch football), and an evening spent around an immense bonfire. Mrs. X’s children wanted to maintain this family ritual and reunite with their friends and relatives for a happy occasion. Their mother, of course, was going to be neither the hostess of this year’s events nor even a participant in them. She was going to be quite alone and, she confessed to me, unbearably lonely and miserable.

A Remedy for the Loneliness

It was at this point in the conversation when I issued my client a challenge: Put attention on those less fortunate than you are. Doing so may, surprisingly, provide you with the self-healing you require at this time. Our appointment concluded; we rescheduled for the following week.

The week following this sorely anticipated Thanksgiving Day, Mrs. X came to our appointment with a remarkably changed demeanor. Not only were her eyes brighter, but so was her overall outlook, as well. I soon learned she had taken my advice. After leaving my office the previous week and picking up the local newspaper, she was spurred to action. Volunteers were still greatly in demand to help with Thanksgiving dinner at a St. Louis shelter for the homeless. Mrs. X immediately contacted the office and volunteered her services for the entire day’s events.

And it was in these humble surroundings–– filled with people not only in dire need of wholesome food and warm shelter but also by those whose hearts and mindsets wanted to serve their least privileged fellow St. Louisans —where Mrs. X found peace and strength and gratitude herself. She had transformed her attitude from self-pity to self-care by caring for others.

During this time of inherent divorce trials, this experience served not only to teach Mrs. X to empower herself by making pro-active choices, but her children were taught an important lesson, as well. Previously, they only had witnessed their mother entertaining the wealthiest of the St. Louis community, never the neediest. And they were struck with new respect and regard for their mother.

Mrs. X ultimately triumphed in ways she could never have imagined before filing for a divorce after 30 years of marriage.

Self-care is important during divorce proceedings and one of the best ways one can care for themselves as by caring for others– by channeling that energy into helping people who are less fortunate.

Want more resources for self-care during divorce? Read my book “7 Secrets from the Divorce Whisperer: Saving Yourself, Your Money, and Your Children During Divorce,” which is available for purchase on Amazon.

Beware of Magical Thinking in Divorce